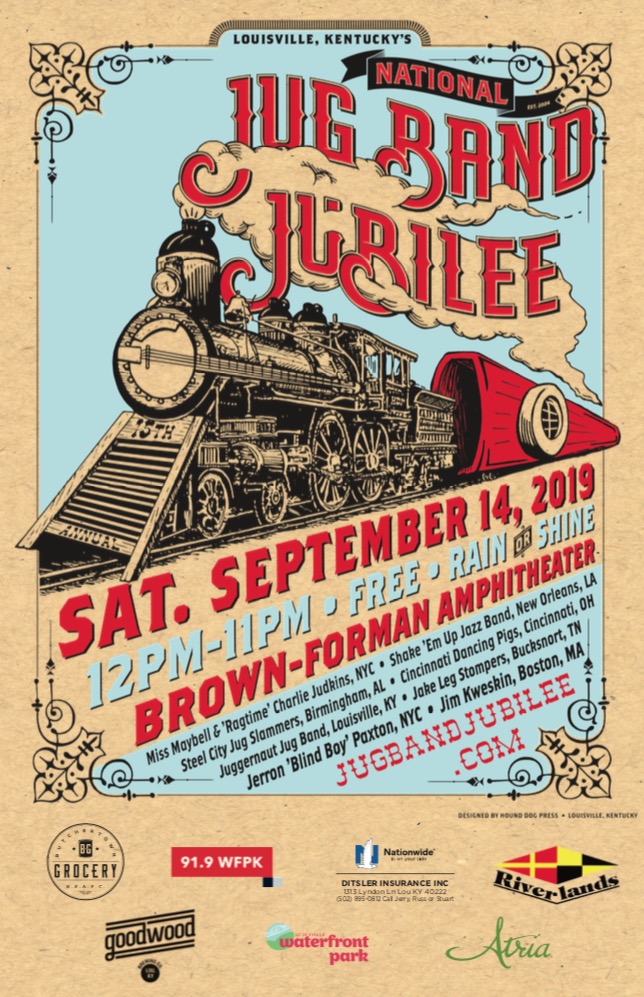 LOUISVILLE, KY, (July 30, 2019) – Jug band music is a pre-World War II jazz style that thrived in Louisville from 1890 to 1930. A former public relations executive named Rod Wenz organized the first National Jug Band Jubilee 15-years ago to celebrate that legacy. The Juggernaut Jug Band and the Cincinnati Dancing Pigs entertained 400 people onboard the Belle of Louisville. Since then the Jubilee has grown into a free, all-day festival that attracts thousands of people to each year to see the best jug band talent in the world.

American folk revival pioneer Jim Kweskin (Boston, MA) will return to Louisville to celebrate the 15th anniversary of the festival. Kweskin founded the legendary Jim Kweskin Jug Band in the 1960s and helped to popular some of […] 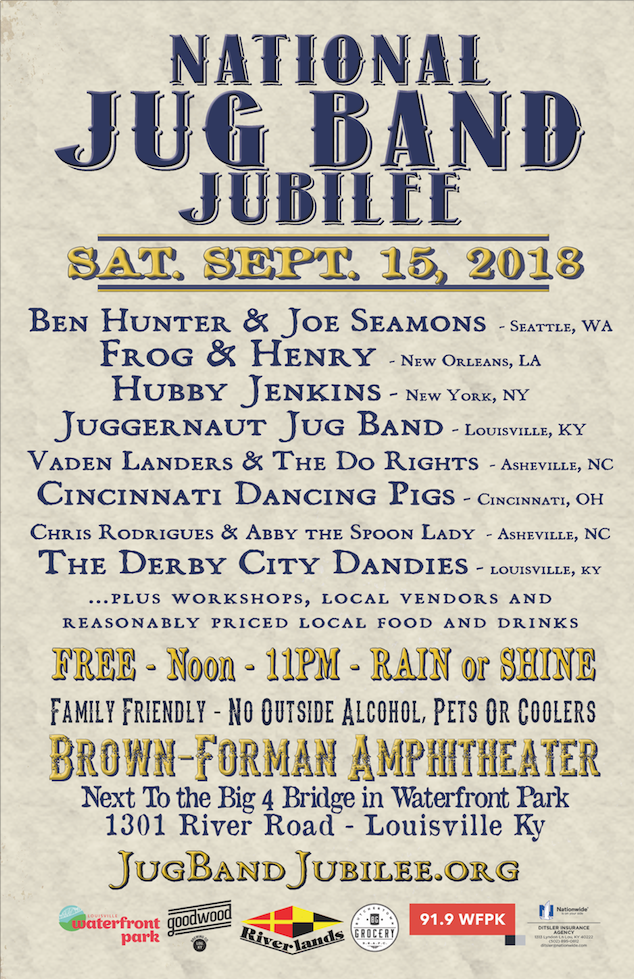 LOUISVILLE, KY, (August 23, 2018) – The National Jug Band Jubilee’s mission is to preserve Louisville’s legacy as the home of jug band music through music and education. In addition to putting on a free, all-day festival, the organization sends jug bands to perform at elementary schools every year on the day prior to the Jubilee and offers workshops during the festival itself. In 2018, its 14thyear, the National Jug Band Jubilee will expand its educational offerings with a panel discussion titled “The Color of Jug Band Music: Examining the Complex Racial History of the Genre.” The talk will take place at the Highlands Community Campus. 1228 E Breckinridge Street, on Friday, September 14 at 7 p.m.

Many associate the sound and feel of jug band music with the 1960s bands that took versions of it into pop: the Roof­top Singers with ”Walk Right In”; the Lovin’ Spoonful with “Jug Band Music.” Others recall that era’s folk-revival out­fits, such as the Jim Kweskin Jug Band, that celebrated and brought back the hot, free­and-easy street music of the early 20th century. First  played by pick-up “spasm bands” that brandished homemade instruments, it had been, in effect, raucous folk jazz, functioning for the frisky young much as neighborhood doo-wop, garage rock and hip-hop would for later generations.

And as with those later genres, some talents who worked the style in the 1920s and ’30s, particularly in the river towns where the music thrived, became recording stars-the Memphis Jug Band and Cannon’s Jug Stompers from Memphis; Earl McDonald, Clifford Hayes and Whistler’s Jug Band from […]

LOUISVILLE, KY, (July 25, 2018) – It is hard to believe in the midst of the summer heat, but fall is fast approaching and with it the 2018 National Jug Band Jubilee. The free, all-day festival will take place on Saturday, September 15, 2018 at the Brown-Forman Amphitheater in Waterfront Park. The 14thyear of the Jubilee will feature a few additions, among them a panel discussion on Friday, September 14 dealing with racial issues within the history of jug band music.

What will never change at the Jubilee is the quality of the music. This year the festival will offer another top-notch lineup of early jazz, jug band, and string band performers. The duo of Chris Rodriguez and Abby the Spoon Lady is the act that has drawn the most attention thus […]

LOUISVILLE, KY, (June 16, 2017) “ The National Jug Band Jubilee is excited to announce that Jerron “Blind Boy” Paxton will headline its 2017 festival. The Los Angeles-born vocalist andÂ multi-instrumentalist was recently featured in the “American Epic Sessions,” the last episode of the four-part PBS documentary American Epic which chronicled the development of American roots music. Paxton™s music draws from country, blues, and early jazz music. According to Will Friedwald of the Wall Street Journal, Paxton is “virtually the only music-maker of his generation “ playing guitar, banjo, piano and violin, among other implements “ to fully assimilate the blues idiom of the 1920s and ’30s, the blues of Bessie Smith and Lonnie Johnson.

Paxton’s grandparents moved fromÂ LouisianaÂ to California in 1956. These southern roots had a profound impact on him. Listening to his hometown blues radio station, as well as the old Cajun and country blues songs his grandmother used […]

LOUISVILLE, KY, (July 30, 2016) – The National Jug Band Jubilee is excited to announce that Grammy Award-winning artist Dom Flemons will headline its 2016 festival. Flemons is the “American Songster,” pulling from various traditions of old-time folk music to create new sounds. Having performed music professionally since 2005, he has played live for over one million people just within the past three years. As part of the Carolina Chocolate Drops, which he co-founded with Rhiannon Giddens and Justin Robinson, he has played at a variety of festivals spanning from the Newport Folk Festival to Bonnaroo, in addition to renowned venues such as the Grand Ole Opry.

The 2016 National Jug Band Jubilee takes place at the Brown-Forman Amphitheater on Saturday, September 17. Festivities start at Noon. This is the […]