LOUISVILLE, KY, (August 26, 2016) – Clinton Davis of San Diego’s “G Burns Jug Band” is coming home! The Louisville native was first inspired to play jug band music after hearing the Juggernaut Jug Band as a child. Now the multi-instrumentalist and his jug band will be sharing a stage with that group as part of the 2016 National Jug Band Jubilee.

The 2016 National Jug Band Jubilee takes place at the Brown-Forman Amphitheater on Saturday, September 17 from 1 p.m. to 11 p.m. This is the festival’s 12th anniversary and the organizers have a few special treats for fans this year. The Little Loomhouse will have a booth in the festival’s expanded vendors’ area. There will be several children’s workshops between bands, and much more family-friendly fun.

Here is the current lineup:

The National Jug Band Jubilee was created to celebrate the legacy of jug band music in the River City. Louisville is the acknowledged home of jug band music, a pre-war jazz style that features traditional and homemade instruments. In the late 19th century, African American musicians walked the streets of the River City playing tunes on improvised instruments like empty liquor jugs (“the poor man’s tuba”), kazoos and washboards. By the time the sound reached its peak in the 1930s, it had infiltrated towns up and down the Ohio and Mississippi rivers, especially Memphis and New Orleans. 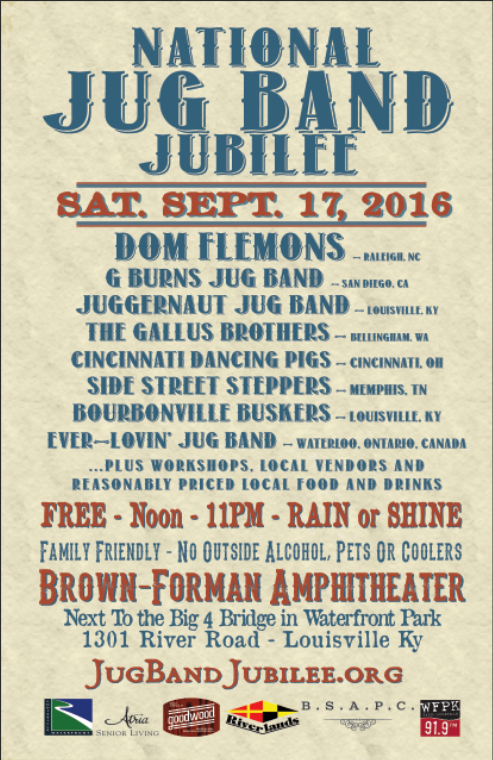